Legs. Legs. Legs. Everyone knows they need to use their legs when trying to create the drive in the second pull or the drive in their overhead movements. “I don’t feel them engage at all.” or “I can’t tell if I am using them”. These are the common reactions when I ask an individual if they know whether they are using their legs.

What are such legs for? #legsmuch?

Let’s talk about 4 possible reasons why you cant feel the strongest muscle group in your body and that is not your back.

Yes, it’s indeed called the first and second pulls within a lift. However, many mistake this action as a pulling action and what happens is that the individual begins pulling the bar off the ground. This results in the use of the back or even the arms to create the initial drive off the floor. 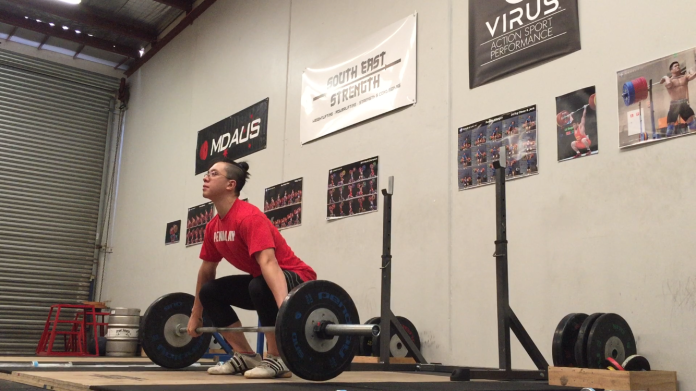 Are you using your legs or your back here?

If you are guilty of this, try focusing on feeling your feet as you move the bar off the ground. Feel like you can spread them out and push into the ground. This will help you begin the movement and engagement of the legs right from the beginning. Yes. It becomes a push with your legs off the ground to get the bar moving.

2. You are pushing off the ground too quickly.

Yes. You may be using your legs to overcome inertia and come off the ground. However, you are thinking of hitting it hard right from the ground and realise you don’t really feel the leg drive happening when it comes to the second pull. Try jumping up as high as possible from the bottom of the squat position. In order for you to generate as much force and as much height as possible, you do not do the violent push with the legs till you come up to a certain height. That is where the range of the lower limb joints are at its strongest to create as much joint extension velocity as possible.

If you are guilty of this, try slowing down the initial portion of the lift. It should feel like you have the ability to accelerate once the bar begins reaching mid-thigh level (for the snatch) or above the knees (for the clean). Slowing the first pull of the lift also helps ensure that you are getting into good positions and you are timing the second pull right. When more proficient with this, that’s where you can add more speed to your first pull and still have the acceleration or explosiveness when the second pull begins.

If you look at the position of the joints within the body, there seems to be a sequence when trying to generate force and transfer that force to an object that you are trying to displace. Take a shot put throw for example. Upon anchoring the support foot onto the ground, the drive is initiated from the legs into the hips and transferred through the torso and shoulders before the arms follow through to drive the shot put into the distance. Very similar to the lifts is this kinematic sequencing of joints. The force is driven into the ground from the feet, through the legs, then the torso and lastly the shoulders to create momentum on the bar. If the sequence is lost in between, that joint can no longer contribute to the summation of force. The contribution of the knees not only help drive more force into the bar but drive the bar in the right direction (i.e. vertical instead of horizontal with just the hips).

If done properly, knees should be fully extended as well as the hips come through.

If you are guilty of this, you should try doing some squat jumps with a very short counter movement but still with the intention of generating as much height as possible. The burning sensation you begin to feel in your quads after a decent amount of reps gives you an idea of you properly using your legs which you should be feeling within your lifts.

4. You are knowingly or unknowingly doing too much with your feet.

I know I mentioned that you need to feel your feet when you initiate movement off the ground. The common error with weight distribution is that the individual needs to feel that the weight gets shifted around within the feet (i.e. from the balls of the feet to the heels, back to the balls of the feet before extension). Imagine that combined centre of mass being physically over the base of support. If it is shifting back and forth as much as I have described, what do you think the muscles and structures in the body are doing to maintain that in the center or from hitting the extreme limits of the base of support? All that effort to keep the balance while moving the weight up can be directed more to actually moving the weight up instead of trying to pull the body back centered.

If you are guilty of this, try thinking of your jumping mechanics and feel where you get to put out the most amount of force when going for a vertical jump. Most of the time, it should be on the balls of the feet. How to get this feeling in your regular weightlifting movements? Do the drill that everyone has been on and using to feel your legs. Heels off the edge and do your pulls from there. Nothing new about that.

Learn to engage those springs within your body known as your legs. They are designed to act as hinge joints and in a synergistic manner, easily propel the torso in a vertical direction which is key to force transference to the barbell for the lifts.

Want to learn more? I am running a workshop talking about the second pull and how to transition under the bar at Crossfit 3039 this Saturday at 10.30am (Melbourne Time). At the same time, come down and listen to Anurag from Crossfit 3039 explain and demonstrate how that same transition is applicable to the muscle up.

One thought on “4 Reasons Why You Cant Use Your Legs.”